A firefighter is hand-rearing three wild bird chicks after their mother was killed in an attack on their nest by a dog.

Inverness-based deputy assistant chief officer John Macdonald rescued the birds earlier this month.  Animal welfare charity the Scottish SPCA gave Mr Macdonald advice on how to care for the chicks, which are believed to be blackbirds.

They were first fed with raw mince mixed with sugared water and have since moved on to a diet of live mealworms supplemented with blueberries and seed.

An Australian Koolie dog who was abandoned by his family has been rescued and retrained to detect koalas.

Bear has been following the aftermath of Australia’s bushfires since January, finding sick, injured or starving koalas that otherwise would have perished. He has now found more than 100.

Video description: Bear runs through the forest and sits beside a tree containing an injured koala, alerting the rescue team to its presence.

A Roman mosaic floor has been discovered under a vineyard in northern Italy after decades of searching. Surveyors in the commune of Negrar di Valpolicella north of Verona published images of the well-preserved tiles buried under metres of earth.

According to officials, scholars first found evidence of a Roman villa there more than a century ago.

Technicians are still gently excavating the site to see the full extent of the ancient building.

A specially-trained school dog has been making home visits to help bring a smile to pupils’ faces during lockdown.

“Everybody loves to see him,” she said.

Video description: Lisa and Albie visiting children at home. Lisa stands at the end of the driveway and Albie runs towards the children, who are delighted to see him.

A bird that became extinct more than 100,000 years ago has reappeared after evolving all over again, scientists have discovered.

The Aldabra rail reappeared on a small island in the Indian Ocean, off the south-east coast of Africa, where it lived.

The flightless bird is a descendent of the flying white-throated rail. 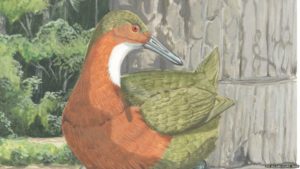 Your friends and family members aren’t the only ones who may be suffering from stir-craziness in quarantine – these little birds have been missing social interaction with humans as well.

Since the Kansas City Zoo in Missouri has been closed to visitors their resident penguins have been eagerly awaiting the return of their beloved human admirers. As a means of keeping the penguins entertained, their caretakers decided to take them on a field trip to the Nelson-Atkins Museum of Art. After allowing the birds to frolic freely around the museum, the museum director and CEO joked that the penguins “seem to react much better to Caravaggio than Monet.”

Deer Here, There and Everywhere!

Pere David deer are extinct in the wild so this is a big success for the breeding programme at ZSL.

Video description: The fauns, who have reddish-brown fur with white spots, and adult deer walking on the grass at Whipsnade Zoo. The fauns are staying close to their parents.

Supermoon lights up night skies around the world

Skywatchers around the world have enjoyed stunning views of this month’s Supermoon, when the Moon appears larger and brighter.

The phenomenon happens when the celestial satellite reaches its closest point to Earth – known as a perigee – and is on the opposite side of Earth to the sun.

This month’s supermoon – the third and final one of the year – is known as the Flower Moon because of its occurrence in Spring. 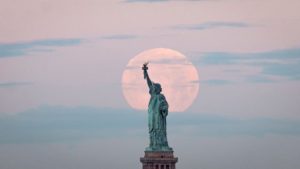 A new Banksy art piece is inspiring the world since it was dropped off, and later hung on display, at Southampton General Hospital on Wednesday.

The artwork shows a young boy playing with his favourite new superhero doll—a nurse wearing a cape and face mask.

On the floor nearby sits his discarded Spiderman and Batman action figures.

The artist said he hoped it would brighten up the lives of the staff and patients, and added that after the coronavirus lockdown, it would be auctioned off with the proceeds to NHS charities. 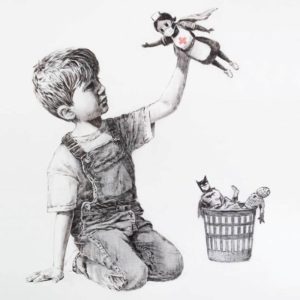 A young Italian student trapped in Spain during the coronavirus outbreaks was recently driven 1,500 kilometers (900 miles) home for free by a Spanish cab driver.

From fish returning to the Venice canals to deer in the streets of London, many of the lockdowns resulting from coronavirus have allowed nature to come back in some of the least-likely places. Thailand is the latest nation to make headlines from the phenomenon.  Though coronavirus has shut down Thailand’s tourism economy, a season of peace and salvation for rare leatherback sea turtles has emerged. Endangered in this area of Southeast  Asia, they are nesting here for the first time in five years. The largest of all living turtles, the leatherbacks have made 11 nests on Thai beaches this spring—more than at any time during the last two decades.

Workers at Park Lane Stables in West London are taking ponies to people’s homes to spread some cheer.

A rare rockhopper penguin chick has been named after the Prime Minister’s newborn son. Zookeepers at ZSL Whipsnade Zoo decided to call the youngster Wilfred, as it will grow up with a “blonde crown” of feathers! 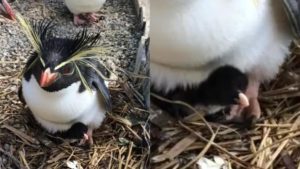 Royal Mail Decorates Postboxes In Support Of The NHS

Postboxes have been painted blue to thank NHS workers for their efforts during the COVID-19 crisis.

Five have been been given the new colour by the Royal Mail and bear the message: Thank You NHS. They are located close to St Thomas’ Hospital in London — where the Prime Minister was treated for Covid-19 — Trafford General Hospital in Manchester, Royal Edinburgh Hospital, University Hospital of Wales in Cardiff and The Royal Victoria Hospital in Belfast.

Royal Mail said the locations were chosen to represent all four nations of the UK, and to commemorate the Trafford General Hospital, the birthplace of the NHS, founded by Aneurin “Nye” Bevan in July 1948.

A goose has made a nest in a flowerbed on the concourse of the currently deserted York railway station and has laid four eggs!

Captain Tom Moore, the war veteran who raised millions for the NHS by walking laps of his garden, has been made an honorary colonel on his 100th birthday.

The occasion was also marked with an RAF flypast and birthday greetings from the Queen and prime minister.

Capt Tom said it was “extraordinary” to be turning 100, especially with “this many well-wishers”.

Przewalski horses are classed as endangered and are the last surviving subspecies of wild horse.

Video description: The Przewalski foal staying close to her mum.

Update: What a star!

Captain Tom Moore has now raised nearly £30 million for the NHS and has opened an Nightingale Hospital via video link.

A 99-year-old great grandma is walking 100 lengths of her driveway before her 100th birthday next week to raise money for an NHS charity.

Win Page says she’s been inspired by Captain Tom Moore. Following in his footsteps Mrs Page, of Middleton, plans to do 10 lengths of her drive every day until her 100th birthday on April 28.

She said: “Captain Tom has been such an inspiration. He’s actually two days younger than me, so I thought if he can do it so can I. The NHS has been so good to me all my life and I wanted to give something back.”

On the morning of Wednesday 15th April, the Animal Care Team were delighted to see that female cheetah Sia had successfully given birth to five healthy cubs! Having reviewed camera footage set up in the birthing den, staff were able to see Sia give birth at around 6.30pm the night before. Two hours later saw the arrival of the fifth cub and Sia was finally able to settle down and allow them to feed.

Cheetahs come from Sub-Sahara Africa and small areas of the Middle East. They are classed as vulnerable on the IUCN Red List so this litter is wonderful news for the species.

The Duke and Duchess of Cambridge’s son Prince Louis has been photographed making a colourful rainbow poster – a symbol of hope during the coronavirus lockdown – to mark his second birthday.

His handprint artwork is one of several photographs released by the family to celebrate the occasion on Thursday.

Similar pictures by children have appeared in windows across the country.

A 99-year-old army veteran who set out to raise £1,000 for the NHS by walking lengths of his garden has completed his final lap, raising more than £12million for the health service in the process.

A baby panda may have been conceived at Ocean Park in Hong Kong while the zoo is in lockdown due to coronavirus.

Two resident pandas, Ying Ying and Le Le, managed to successfully mate on Monday morning– and they’ve been struggling for a while.
With Ocean Park closed to the public, the pair made the most of the privacy